From the Made for TV Mayhem Dusty Bookcase Files: Action TV Tie-ins 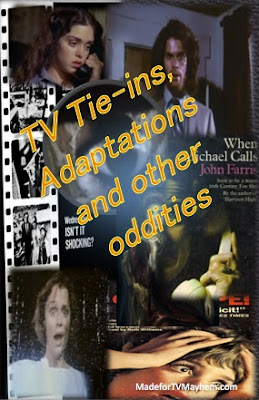 I love that one's love of retro TV doesn't just mean sitting on your duff watching old vhs tapes or DVDs (when you are lucky enough to find something in that format). You can also sit on your duff and read books that either inspired classic television or were adapted from tele-plays. It's an endless cycle and one that I'm happy to find myself stuck in the middle of!

Through the years I have collected not just books about television, I've also amassed a small library of tie-ins and novels. They range from the mainstream (who doesn't have a copy of When Michael Calls?) to the more obscure (I treasure my copy of Griffin & Phoenix: A Love Story) to the absurd (I'm saving those titles for later!). I decided to feature some of my collection in a series of themed articles that I quickly and probably not-so-cleverly dubbed The Dusty Bookcase Files. Below you will find what I have sitting on my bookshelves with regards to Action TV. I haven't read any of these yet, but the Charlie's Angel's book is looking mighty tasty right now. 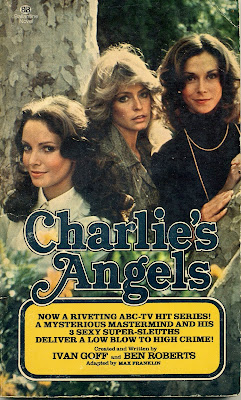 Charlie’s Angels by Max Franklin: Max Franklin was a pseudonym used by noted author Richard Deming. He often wrote under various pen names, including Ellery Queen and he wrote most, if not all, of the Charlie’s Angels adaptations (he and also penned the Starsky and Hutch novelizations!) In short, he's super cool. Deming, who passed away in 1983, also wrote a few produced tele-plays including scripts for M Squad and Alfred Hitchcock Presents. This book is adapted from the pilot episode of Charlie’s Angels, which aired on March 21st, 1976 and it’s pretty high up on my reading pile. 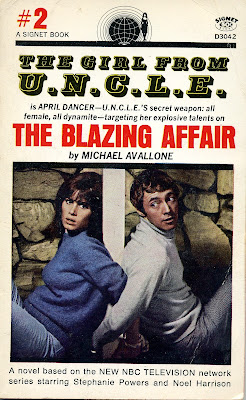 The Girl from U.N.C.L.E. #2: The Blazing Affair by Michael Avallone: Avallone was another established author who wrote popular thrillers under several names, including the pseudonym Ed Noon (or Edwina Noon if he was feeling frisky). He worked on several novelizations under his real name, and penned the two Girl from U.N.C.L.E. tie-ins. This adaptation seems to be an original story based on the characters created for the series. According to the back cover, our favorite girl takes on TORCH (The Order of Reich Crusade Hierarchy!), which is an organization looking to create a super race! There were only two tie-ins published (the first one was titled Birds of a Feather Affair), but there was also a series of comics released in the late 1960s. Gah-roo-vey, baby! 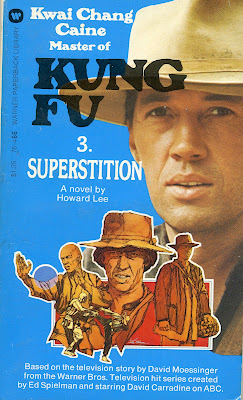 Kung Fu #3: Superstition by Howard Lee: Here’s a nifty piece of trivia – Although Howard Lee is the credited author of all of the Kung Fu novelizations, these tie-ins were all written by different authors. Ron Goulart, who wrote the Superstition tie-in, worked heavily in the sci-fi genre and may be best known as the ghost writer of William Shatner’s TekWar series. He adapted both the 2nd and 3rd Kung Fu books. This adaptation was taken from the tele-play of the same name, and the episode originally aired on April 5th, 1973. The story focuses on a mine project that unearths an Indian burial ground! Of course, some hijinky supernatural stuff happens and, presumably, our Caine saves the day! He’s cool that way. 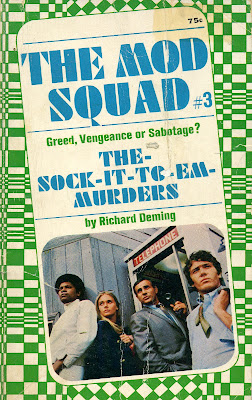 Mod Squad #3: The-Sock-It-To-Em-Murders by Richard Deming: Deming, who also wrote the Charlie's Angels tie-in did not use a pseudonym to pen this novelization, which seems to be an original story based on the Mod Squad characters. According to TV Obscurities, this novel is a pretty darn good read, and was easy to follow although the reviewer had never seen the series. I have to admit, I have only seen a few episodes myself, so I’m curious to see how well it represents the Mod Squad to a newbie like me. Plus, I love the cover. Another one to put on the top of the pile. 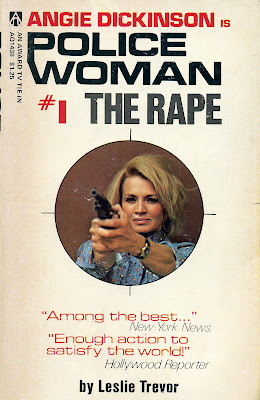 Policewoman #1: The Rape by Leslie Trevor: This book, which was published in 1975, was based on Edward DeBlasio’s Policewoman teleplay titled Warning: All Wives, which originally aired on September 27th, 1974 (the original title was Seven Veils to Murder, but it seems to have been changed before it aired). According to the back of the book, this novelization is about Pepper’s search for a criminal who is assaulting the wives of men who are convalescing in the same hospital. Trevor adapted several of the episodes into novels, which as you can see by the cover, offers “enough action to satisfy the world!” Holy molie, I’m not saying that places my expectations high for this book, but yes, my expectations are high. 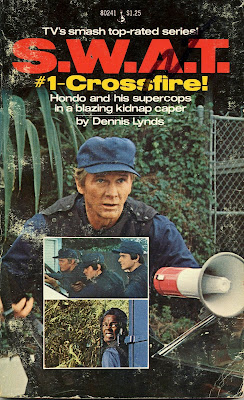 S.W.A.T. #1: Crossfire by Dennis Lynds: The author of Crossfire is best known for writing mystery novels under the pseudonym Michael Collins. Lynds adapted an episode of S.W.A.T. titled Red September. This title was apparently changed prior to the airdate and it now known as Death Score, and it originally aired on April 7th, 1975. The story about kidnappers who hold an entire basketball team hostage in exchange for a hearty ransom sounds mucho action packed-o! Oh yeah.

Which one would you read first?
Posted by Amanda By Night at 10:24 AM

There's one for Starsky & Hutch as well called "Death Ride."

Back in the day, almost every TV series got a novelization tie in. I used to have one for the Judd Hirsch series The Law, which I had never seen or even heard of.

Even "Shannon," Kevin Dobson's other Universal TV series where he played a New York cop, had one (and it only lasted nine episodes!).