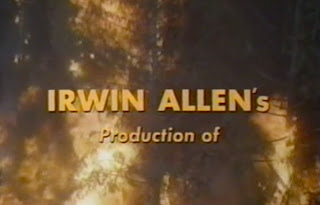 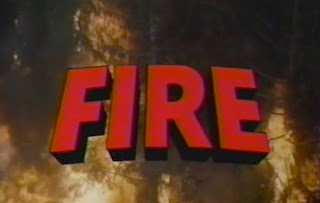 Irwin Allen brought disaster movies to both the big and small screen. He produced Fire in between The Poseidon Adventure and The Swarm, along with several other tele-film treats (including Flood). This is so not like me, but I do prefer his theatricals to his television fare. It’s not that Fire is a bad movie really, but it is easy to lose patience with its somnolent pacing and feels just a tad too long. 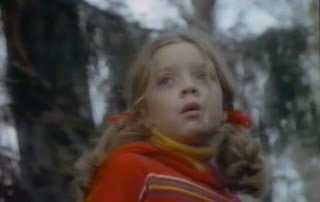 Fire starts with a bunch of convicts working in the forest. One of them (Neville Brand) starts a somewhat minor blaze, and the rest of the chain gang attempt to extinguish it. However, it reignites and the inferno heads towards the sleepy community of Silverton. The melodrama rages just as strongly in this village as we see that the burning fires are both literal and metaphorical. Alex (Alex Cord) and Peggy (Patty Duke) are reluctantly heading towards a divorce while Sam (Earnest Borgnine, who replaced Fred MacMurray) and Martha (Vera Miles) are heading towards potential coupledom and Harriet (Donna Mills) has her trajectory set towards total hysteria when one of her grade school students is lost in the fiery forest! 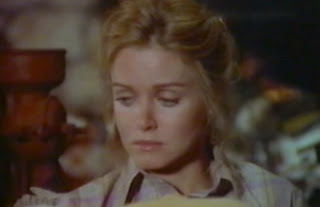 While I do love a good soap, and I certainly enjoy watching things go up in flames, the romance stories simply aren’t that captivating. The section of the film dedicated to a convict named Frank (Erik Estrada) attempting to escape so he can prove his innocence leads nowhere, and that desperate search for a child named Judy (Michelle Stacy) is anti-climatic at best. 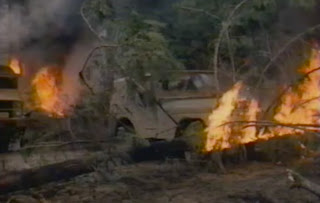 Although the stories are bare and mostly uninvolving, seeing this cavalcade of small screen actor awesomeness made up for a lot of Fire’s downfalls. The film, which was shot at Burbank Studios and in Oregon, cost $2.7 million, making it the most expensive TVM at the time of its production. The crew took advantage of slash burnings in Oregon and used them in their footage. So, what Fire does have, obviously, is lots and lots of fire, and true to Allen’s slick sense of suspense, you are never sure who is going to get out alive. There was one death in the film that had me gasping, and isn’t that why we are drawn to the disaster genre? These films feature large scale calamities with all the glamour of any other major film but are also all the more traumatic through the unknown tragedies that may lie ahead! We are a complicated species! 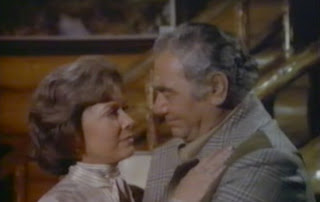 Irwin Allen liked to think big with his small screen disasters and made a deal with Warner Bros. to release his tele-films overseas theatrically. In an interview Allen joked, “I created a marriage between Warner Bros. International and the network. To the profit of both and to myself, of course.” For Fire and Flood, the network and the studio put up the money, which made the films half as expensive for both companies. Allen liked that his films were about big visuals, and could translate to any audience. He said, “They can almost be seen without dialogue. They are action films with basic human appeal.” There is a reason this guy was nicknamed the Master of Disaster! 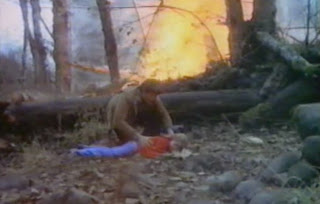 The 120-minute film was re-edited into a 90-minute feature and aired as a twin bill alongside Flood, on June 11th, 1978. It was nicknamed TV’s first disaster double feature! And if you'd like to reenact this doubleheader, you can buy both Flood and Fire on DVD through Warner Archive!

Fire! is indeed a pretty sorry movie, the sorriest of Irwin Allen's TV disaster movies--neither good nor bad enough to be really enjoyable. You can't pretend everyone's "trapped" when they're running back and forth so freely, there's too much mismatched stock footage and a few continuity issues (primarily little Judy, who winds up unconscious with a lump on her noggin from some offscreen mishap).

But there are a few moments of grand silliness; BEAR OUT OF NOWHERE!, for example, or that one kid who gets trapped because he forgets how doors work.

If I were to rank 'em on the basis of great casting and sheer awfulness, The Night The Bridge Fell Down would come out on top, easily. The special effects are horrible, but James MacArthur, Barbara Rush, Leslie Nielsen, Gregory Sierra, Eva Plumb, and Desi Arnaz Jr. make the best little ensemble since the Poseidon rolled over.

Flood! would come next (Another kid with a head injury! Jeez! Not to mention Roddy McDowall completely wasted in a weird overlong cameo), then Hanging By A Thread, Allen's three-hour ripoff of the seventy-minute Skyway to Death featuring that ATCHKA!! guy from The Incredible Melting Man.

Cave-In! has Ray Milland and Leslie Nielsen (and James Olson's phenomenal over-the-top turn as an armed crook), but it's also a suspense-free affair directed with absolutely no flair whatsoever. The soapy flashbacks are more entertaining than the lame perils the cast faces. Sadly, it's still more enjoyable than Fire!