The Night That Panicked America (1975) 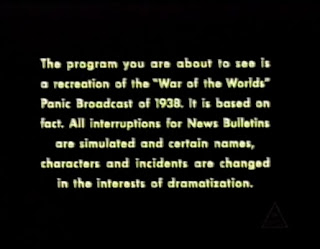 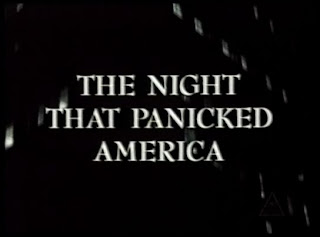 Picture it – Halloween, 1938. Aliens have descended upon America and one radio network is broadcasting the play by play. As the story unfolds, a panic sets about the listeners. Some head towards Grover’s Mill, New Jersey where the chaos started. Others decide to flee the area and literally head for the hills. The country is in utter terror, who knows how they will react.

And the whole thing was a hoax. 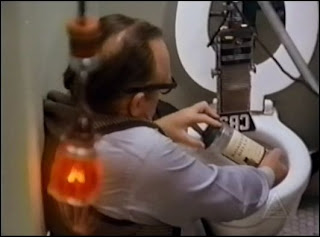 This, my friends, is how you make great radio
By now, the legends regarding Orson Well’s brilliant rendering of the War of the Worlds are infamous. From stories of people running through the streets to the guys who shot a water tower thinking it was a spaceship, this night has come to signify not only how wonderful this HG Wells’ adaptation was, but also how powerful the media can be. The Night that Panicked America is a recreation of that wicked night that left America reeling.

Night is separated into sections. The first deals with the actual broadcast and features a behind the scenes look at Welles (Paul Shenar) and his cohorts creating the most suspenseful night of radio. From this standpoint, things look fiendishly clever (like creating the sound of a spaceship door opening by using the reverberation of the unscrewing of a jar inside a toilet!) but completely mundane, as actors in a bare room read from a script. The second section of the film deals with various listeners who are swept away in the realistic broadcast. Each one is facing an everyday problem, like a marriage breaking up or a young man wanting to go to war to defend his country while his father attempts to talk him out of it. This is where the movie creates some intense suspense scenes. With everyone facing uncertain doom, it’s anyone’s guess as to how each will act in response to the situation. 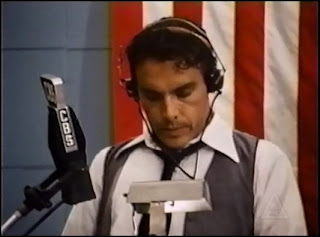 Wow! They made Orson Wells hawt!
Night is rife with familiar television faces who all do a wonderful job. Tom Bosley is the befuddled producer who first catches wind of the ensuing chaos, John Ritter is the young man desperate to defend his country against Hitler, Paul Shenar is the great Orson Welles, the director with a thunderous voice and an ingenious way of crafting a story, Will Geer is the reverend faced with the idea that his god does not exist and Vic Morrow and Eileen Brennan are the couple who will do anything to keep their kids away from the Martians. And I do mean anything! And I haven’t even gotten to Meredith Baxter, Granville Van Dusen or Casey Kasem!

Nicholas Meyer, who would go on to direct Star Trek II and VI wrote this excellent script, capturing both the inside and outside of a momentous occasion in our history. Joseph Sargent, who is such a stalwart in the world of television movies (Longstreet, Hustling), puts together a taut, gripping tale that encases so many stories, and the duo bring each one to a satisfying conclusion. The standout story belongs to Morrow and Brennan. I was literally covering my eyes I was so scared! That’s good filmmaking! Fans of The Mist will also catch the tribute it made to Night. 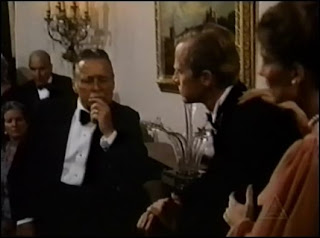 Even rich people got scared! Whoa!
As I watch the movie now and as I’m sure it was intended when it was made in 1975, Night is more than a retelling of a wondrous night in pop culture history. The film is bookmarked with the echoing, fanatical voice of Hitler, reminding the viewer that 1938 wasn’t just the year radio proved it worth as a medium. It is also reiterates the fact that we were living in the looming fear of World War II. It is suggested by this bookmark that perhaps we reacted the way we did simply because we’d been living on the edge of uncertainty and we were worn thin. Night’s ability to craft such tension with the characters is just one reason to see it. It’s also a staunch reminder of our dark history with war and what it does the human psyche, even to those of us not fighting on the battlefield.

Read More about The Night that Panicked America here:

War of the Worlds: Invasion - A Historical Perspective

Now this looks so intriguing, never realized they made this. So funny, this actor, who was about 40 at the time, is playing 21 year old Welles! I love Orson Welles. He's the guy no matter how much junk you may hear about him you can't help but admire his film genius. I thought he was pretty handsome too.

Ginger, I agree about Welles. He was very handsome in Citizen Cane (and that's a wonderful film). This is a very well made film that I think captures a lot of must have happened that night. It's really interesting and brilliantly written and directed. It's worth checking out.

(sigh) and now all we get from TV is America's Most Talented Jersey Housewives or whatever.. .

i remember watching this the night it aired in 1975 when i was 12 years old. i looked for it for years and finally found a bootleg copy of it. I was so glad to finally see it again!