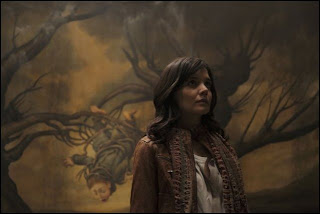 Where have I been? The teaser trailer for the Afraid remake hit Comic-con a couple of weeks ago, and has been floating around the internet for at least a couple of days. I think it looks decent, but we're talking about remaking one of the most beloved made for TV movies of a generation. What can we expect?

I can tell by a quick perusal of the IMDb page that Sally, who was originally brought to life by Kim Darby, is no longer the matriarch of a recently inherited house. Now she's a little girl being played by Bailee Madison. Guy Pearce (yowza!) plays her dad. And Katie Holmes is his hot piece of tail of a girlfriend. Ummm, OK. Based on all I've heard this looks more like Katie's movie, but that might just be because she makes good gossip fodder. At any rate, it is definitely a bit jarring to see Katie in the lead role because one of the most fabulous qualities of Darby is that she could be anyone. She is so utterly relatable, eschewing all glamour to completely embody a character just about anyone can feel connected to. I'm not sure Katie can pull that off.

Don't Be Afraid of the Dark Teaser Trailer

However, we are talking about a Guillermo Del Toro production (he also co-wrote), and if anyone can take this simple and eerie premise and turn it into good remake cinema, it's Del Toro.

I actually wrote about this remake awhile ago, and I feel my opinions are pretty much as they were then, even with the new trailer which I just saw today. I don't think Katie Holmes is a bad actress... In fact, I adored her on Dawson's Creek, but I don't think she's a very strong leading lady either. Still, under Del Toro's wing, she has the potential to truly shine and the Don't Be Afraid of the Dark remake has every chance of being a classic.

We shall wait and see... 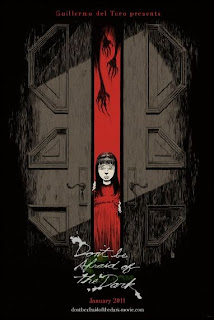 Have you seen PIECES OF APRIL Amanda? Katie is fabulous in that film so I know she can deliver with the right material. Del Toro's name attached to this gives me a lot of hope so I have my fingers crossed on this.

Should we be afraid of your post about being afraid of your Don't Be Afraid of the Dark remake? Sorry. I think it's a good omen if the little dudes aren't CGI.

I'm looking forward to this! I trust Del Toro not to muck it up and the trailer looks pretty good. I wish Holmes wasn't in it but she was good in "the Wonder Boys". I like the idea of making Sally a kid too because the little creatures are exactly the type of monster that seem sprung from a child's imagination. Also, if this does well maybe we'll get a "Don't go to sleep" movie!? -Unk

Jeremy, I have not seen Pieces of April. I like Katie OK, but she seems more like a non-entity than anything else.

But I agree about Del Toro and I also hope there are no CGI creatures. And of course, I love the idea that people who might not have heard of the original will now want to see it. Cool!