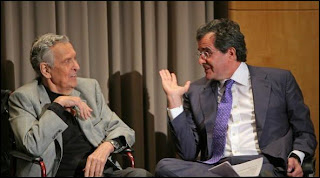 David Gerber is on the left

Esteemed television producer David Gerber passed away on January 2nd. Gerber was behind the groundbreaking pilot for the series Police Story (1973). He worked primarily in television and had his hands in all kinds of good stuff including Police Woman (1974 - 78), The Girl on the Late Late Show (1974) The Courage and the Passion (1978), Cry for the Strangers (1982), and the enormous list goes on. Here is a link to his IMDb page. Read it and drool...

Gerber produced one of my all time favorite made for TV movies of the 90s called On the Line (1997) starring Linda Hamilton as a cop on the trail of a group of slick bank robbers. The actual crime story was just the sub-plot though and On the Line delved into the the world of a female cop in a man's world. It's an extradordinary drama that I never get tired of watching. It airs on Lifetime every so often, catch it if you can!

I found this obituary on Mr. Gerber. According to all reports, Gerber treated everyone from the studio bosses to the mail room guy with equal respect, proving old Hollywood will never be outdone. Condolences to Mr. Gerber's family.
Posted by Amanda By Night at 7:30 PM

Veteran TV writer Larry Brody's book Turning Points In Television (both an interesting look at some highpoints of TV and a semi-bio of Mr. Brody) has some nice vignettes about Gerber, for whom Brody worked on Police Story.