Watch The Hitchhiker: Made for Each Other... Online! 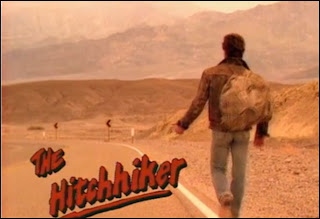 The Hitchhiker is one of the incredible shows that you know you watched, but now hardly ever hear about. I have great memories of this wickedly dark series, even though I didn't have HBO back in the day. I was pretty much forced to rely on the kindness of my more sophisticated friends (i.e. rich). The Hitchiker ran for 8 solid seasons (1983 - 1991) and starred the babe-a-rific Page Fletcher as this guy who basically, uh, hitchhiked. He would guide the audience in the most ambiguous ways and was the barest of plot devices, but me likey! 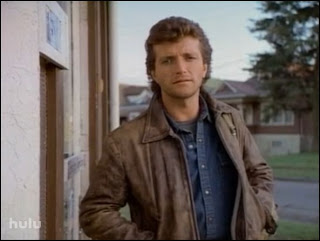 He hitchhikes and reminds me of Rutger Hauer! **sigh**
There are two episodes I remember distinctly. One is O.D. Feelin' featuring a bag of coke making the rounds in a post apocalyptic (i.e. late 80s) world. My favorite line was, "I guess the rat just ain't selling tonight." I also remember an episode titled Made for Each Other, which features Bill Paxton and Bud Cort as two serial killers who cross paths and cross each other! This episode left me in awe with the wonderful acting and its nice, tidy ending. Give it a go, the whole episode is below:

The hitchhiker's comments were hilarious because they generally had nothing to do with the action, and half the time they made no sense.

Hi Doc! :) thanks for stopping by. I really to need to revisit more episodes of this show. I just remember him being all serious (and wearing tight jeans!)...

Oh wow, does the hitchhiker bring back memories. Being a little kid with HBO and not knowing what the heck was going on, but it had the most awesome theme song ever! I have that on my Itunes.

I remember that my mother liked to watch these movies because she said that the main actors was so handsome. Buy Viagra Generic Viagra