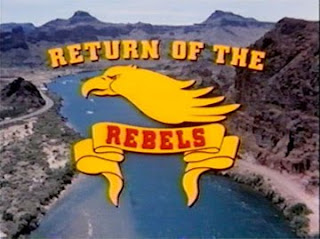 I loved this movie and I won’t make any bones about it. It’s simply lighthearted, entertaining fare that was created solely to allow the viewer to shut their brain off and enjoy the ride.

Barbara plays Mary Beth, a beautiful widow who is desperate to keep her campground business afloat after her husband’s passing. She’s doing a fairly good job except this gang of obnoxious hoodlums, headed by this hot guy called K.C. Barnes (Patrick Swayze), keep running off her customers. The depression of her situation makes her nostalgic for the good old days and she looks up some of her old friends from her motorcycle gang! When she reunites with Sonny (Don Murray), an old flame is reignited and to prove his undying love for her, he pledges to get rid of K.C. and his merry band of troublemakers. Sonny calls upon the rest of the Rebels, and after a fun get-back-in-shape montage, they head off to the campgrounds to put a little foot to ass. Too bad they aren’t that good at it! 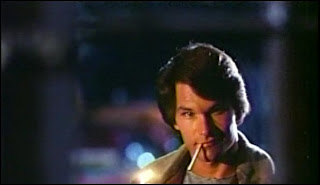 The leer...
Return of the Rebels is chock full of great faces. Besides Swayze, Eden and Murray, you see a hilarious Jamie Farr, Robert Mandan and Chris Connelly donning leather and looking pretty good as the aging biker gang. It’s hard to say much more about this movie because essentially it’s a dip into the pool of nothingness. And I mean that as a good thing. A very good thing. You know how some films aren’t great works of art but manage to lift your spirits no matter what? Well, Rebels is one of those films. There’s no real message here, just goofy giggles and a chance to watch some of the greatest faces of the small screen band together against future film star Patrick Swayze. 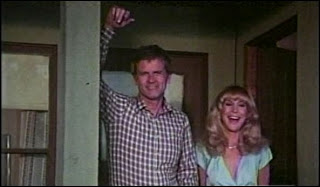 Let the good times roll!
A few words about Swayze’s character: He’s interesting as K.C. because even though I know Swayze has taken on some darker roles, he really had such a likable persona that in Rebels he comes across as not-that-bad (not to mention, he pays Mary Beth good money to crash out at her grounds every week!). He doesn’t really steal or anything, he just runs around and leers a bit. It’s a great precursor to what Johnny Castle was probably like before Dirty Dancing. I watched this movie just a few weeks before Swayze’s untimely passing and I think this is a great little unknown part that more of his fans should seek out. He’s a lot of fun to watch. 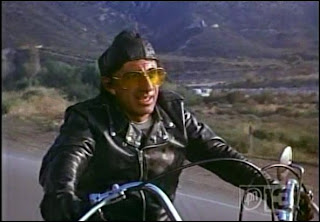 Email ThisBlogThis!Share to TwitterShare to FacebookShare to Pinterest
Labels: adventure, comedy, made for tv

Cool, have to look out for this one. Another very early Swayze film, 'Pigs vs. freaks' from 1980 or 1981- football with Adam Baldwin as a Hippie and Swayze as the conservative cop 'pig' brother of Baldwin's girlfriend. Fun in moments, and Swayze looks great.

I remember that I used to watch this movie with my father we always got together each time that he would travel and we had a lot of fun.Generic Viagra Buy Viagra

Is there a download link for this movie?
How about Dr Cook's garden. I saw Bing in this on TV when it first came out. :)

My van is heavily featured in this movie! Check out my blog, and instagram account to follow the restoration of Infinite Surf! It is the yellow Ford Econoline that is in a lot of shots from Return of the Rebels!