The Many Cowboy Hats of Dusty Farlow 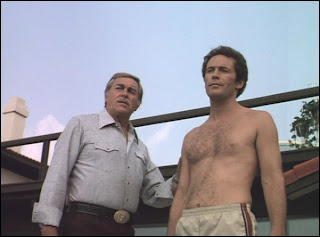 I actually prefer Dusty without the hat... or clothes!
Mmmmmm, Dusty Farlow. The man was an heir to a fortune but held the heart of a drifter. He was a bull riding thrill seeker who lived like a pauper and eventually won the heart of Mrs. Sue Ellen Ewing. Sue Ellen once admitted to Dusty that she was a snob, but he saw through her whiskey-jaundiced eyes and recognized her for the fallen angel she truly was. After he left Southfork, she found herself going to a modest cafe hoping she'd get a chance to make the cowhand buck. She got lucky too. Once their eyes met across the semi-crowded mustard colored diner, it was L-O-V-E. Sue Ellen was ready to give JR the boot, but when she learned that Dusty could give her the world - he was as rich as JR - she decided it was better to let sleeping dogs lie and went back to JR for what she thought was for good. 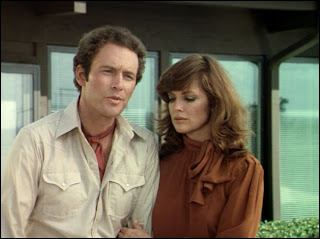 This is Dusty letting Sue Ellen down gently... for me! No I swear!
Then came the news report that Dusty had perished in a Cessna accident. Sue Ellen hit the bottle. She hit it hard, displaying an endless array of emotions in a way only Sue Ellen could do. Full of various wide eyed glances and honey covered smart ass remarks, the southern belle eventually decided to give herself to Clint Ogden (not as hot as Dusty, but then again, who is?!?) only to dump his ass too. Clint was pretty graceful about the whole affair, which turned out to be lucky because **drum roll please** Dusty was ALIVE! ALIVE, do you hear me, ALIVE!!! In all its Affair to Remember glory, the world learns that Dusty faked his death (thereby leaving the poor cowpoke who actually died with a family in turmoil) because he was paraplegic. Scooting around his old house with Dad, he whittled away his days stalking Mrs. Ewing to ensure that she was living life to the fullest. Finally, Dusty regained the use of his legs but was still having problems down south. You get my drift... Handsome Dusty was impotent. And Sue Ellen didn't give a rat's ass. She took off for his ranch, leaving JR in the dust(y). 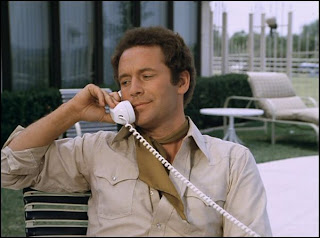 That's Dusty putting in a restraining order against me!
Life seemed pretty good for Dusty and Sue Ellen but finally his ego gave way to fact that not only could he not please her in the way she deserved, he also couldn't ride around wrangling innocent cows. This got to Dusty and he hopped in the saddle (wrong one though) and found a new life riding bulls (still wrong one). Sue Ellen gracefully acknowledged that he would have to return to his drifting cowboy ways in order to sustain any kind of happiness. And with that, Dusty rode off into the sunset.

I could have cried.

Sue Ellen did and yet never smeared her makeup. How does she do it?!? 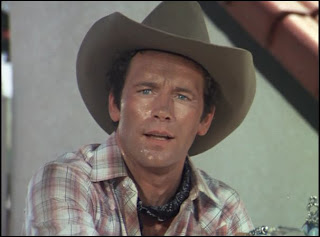 I loved Dusty Farlow too but my friend always told me that he was so ugly that they didn't know what I found attractive on him. Buy Viagra Generic Viagra