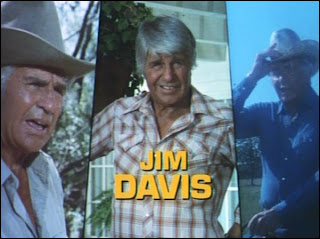 Jock Ewing was the last of the great cowboys. Thick, silver hair fell over his face like waves and his grizzled features belied those bright blue eyes. 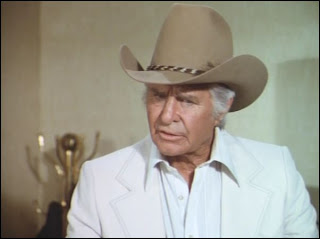 White hair? Check. Cowboy hat? Check. White suit? Check. Swooning? Check.
If the world really did have a Jock Ewing, I'd be more than happy to kick back bourbon with him and invite back to my place to prove that the Lone Star State didn't have to be so lonely after all. I would however, do my best to make him go by John Ross. Yelling out Jock in the middle of the night just ain't a ladies style... 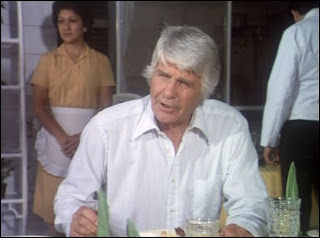 Jock's iron fist is firmly in place
Jock and I would probably not get that far because if there's one thing this oil baron is known for is his complete indecisiveness. Constantly being pulled from Bobby to J.R., Jock was lucky if he could muster more than an "Alright," or "I see your point". He did grow a spine as the years progressed, but in the end, a lot of his anger went towards poor Sue Ellen while J.R. was laid up in the hospital with a bullet lodged next his spine. After that, Jock got a real taste for the iron fist, and he ran amok with the rivaling brothers, forcing Bobby and J.R. to compete for Ewing Oil and for Jock's love.

That's the way it goes in Texas, I guess.

To win Jock's respect, Bobby stepped down as President of the oil business and J.R. started a revolution in a small country. That sounds about right. Jock demanded the best from his kids and I guess with a Third World country blasting themselves to kingdom come how could he begrudge his eldest? 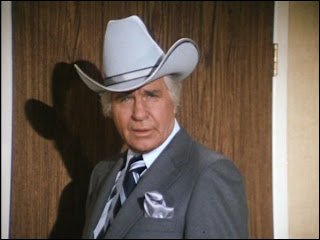 Is Jock looking at me? I think he's looking at me!
Jock also had a way with the ladies. Miss Ellie was more than aware of Jock's allure and held onto him like guitar pick at a Stones concert. When a White Hot Julie Grey came into the picture, after being dumped as J.R.'s mistress and after being uncovered as a double agent against the Ewings, Miss Ellie came out fighting. Jock had already let Julie down easy, but I guess she hadn't suffered enough.

Jock didn't do too much after that, as his days as patriarch of the Ewing dynasty began to dwindle, so did his ability to give one answer and stick with it. He was half supportive (and half belittling) of Bobby's whiny idealism and then he'd give J.R. the OK to kick a baby if it would bring more green to the Southfork Estate. And I haven't even mentioned Gary or Ray, the other sons in Jock's life. One split and the other wore slick cowboy suits and helped him... make decisions. A real Ewing, I must say. 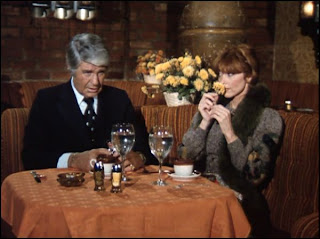 Julie falls under Jock's spell... as he apparently belches
But back to me and Jock. I know he'd gently tell me no, give me a monologue about his love his Miss Ellie (Texas Style, of course) and probably down one more whiskey before he tipped his cowboy hat and walked off into the sunset.