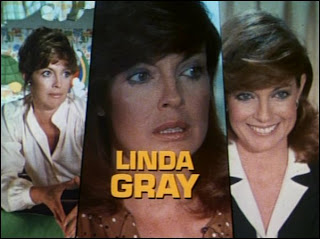 Sue Ellen Ewing. Complicated, sophisticated, bitchy and if I get my way, drunk.

This fierce creature married into the Ewings because mommy raised her to marry for money, not love. At one point during her whirlwind courtship with J.R. she thought she'd found both, but that was before she learned that J.R. was having his way with more ladies than Norm Peterson was having his way with beer (i.e. that's a lot!)! 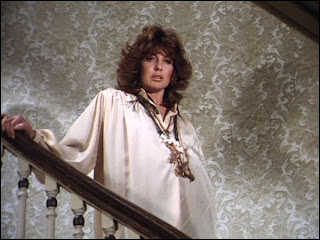 Pregnant and drunk, is anything more beautiful?
Sue Ellen started looking for love in all the wrong places. Namely Cliff Barnes, the Ewing's arch-nemesis. At first glance, Cliff seems suave and sincere, and although he loved his little Sue Ellen to the point of no return, he also hated the Ewing's enough that you had to wonder if his insistence on checking Sue Ellen's oil was partially in the hopes of getting even with J.R.
Then Sue Ellen ended up pregnant. Was it J.R.'s or was it Cliff's? At this point, it was a losing game either way. Thank god Sue Ellen found solace in the bottle. Now, I'm all for sipping a bit of the bubbly when I need something to go to my head besides my thoughts, but this bitch was not only drinking and driving, she was drinking, driving and pregnant. 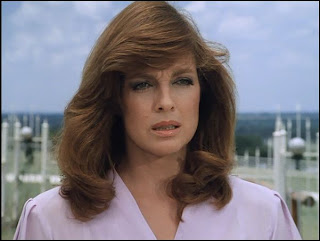 The perfect picture of dysfunction - and glamour!
Miraculously, the baby came out normal. When I say normal, I mean he's still screwy - he's a Ewing for crissakes - and the fact that he didn't talk for about, oh, 4 seasons makes one wonder if maybe the bourbon wasn't having an effect on poor, dumb, little John Ross. And naming it John Ross was a bit ballsy to begin with. I mean, Sue Ellen still wasn't sure this kid belonged to her own husband. After some catty male fighting and sneaky hijinks, it was finally determined that John Ross was indeed a little J.R. in the making - much to Sue Ellen's chagrin.

Finally, Sue Ellen found Dusty, a cowboy who ran the rodeo circuit and who made sure his 501s hugged him in all the right places (boy, did they!). It later was revealed that Dusty was not only a cowboy but a completely loaded cowboy, which scared Sue Ellen at first because she hoped Dusty had nothing J.R. could steal. Luckily, he wasn't into money so J.R. could pose no real threat. But eventually, Dusty lost more than a bankroll... he lost his manhood! In a horrible plane accident where everyone thought Dusty had perished (another factor keeping Sue Ellen close to the bottle), it was soon revealed that he was alive but couldn't walk, or... well, you know.
I mean, you do know, right?

I have to spell out everything! 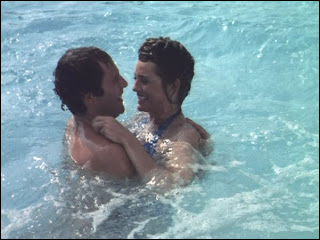 The best of Sue Ellen's days at the Southern Cross
Anyway, this whole I-lost-my-manhood thing really put a damper on Dusty and Sue Ellen's love life (gee, really?), and he decided hitting the rodeo circuit once more might instill him with some kind of masculinity.
I should mention here that he had regained his ability to walk. Otherwise, it just sounds weird that a paralyzed man would want to ride a bull. But the thought of it is great! 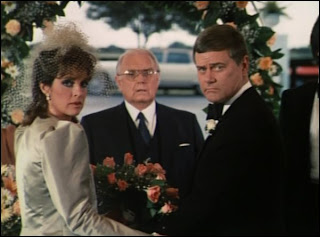 Nothing gets between a woman and her man and her horrible metallic wedding dress!
Again, another lucky chance for Sue Ellen came along when Dusty's dad, Clayton decided he was the man for her. His friendship allowed her stay on the wagon, to get a place of her own and start to build some self esteem.
Then J.R. Ewing came waltzing back into her life. All smiles and talk, she once again fell for his promises in the dark. They remarried and although things looked like they might be OK, he once again couldn't keep it in his pants and Sue Ellen moved into another room in Southfork (how many rooms are in that joint?).
I kind of wish Sue Ellen would get together with Bobby. Not that I like Bobby that much (he's a whiner), but he's a step up and pretty cute. I still don't really get the whole J.R. as a sex animal thing except perhaps he's got power coming out of his, well... you know...

You do know, right? Well, I can't think of a corny euphemism right now, so you'll have to just run with it...

So now you know why Sue Ellen is all cold and hot and bothered at the same time. Unfortunately, you know she's hit bottom based on the mullet she's been sporting for the last 2 season or so.

Sue Ellen, please go back to the 70s, schtup Dusty and enjoy life! 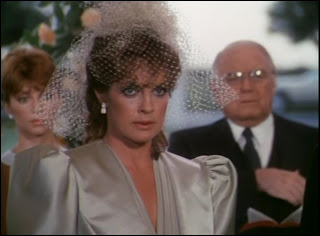 Sue Ellen and her antics drive me crazy! She and J.R deserve each other. And John Ross is a strange little kid isn't he? lol. But he's opening up at the day camp. I love how Josh Henderson plays him, he still looks very quiet, private and reserved.

I LOVE Clayton Farlowe! He's just awesome. Sue Ellen really lost her chance at a great man. But that's Sue Ellen, she just looks at people and says, "I just don't understand…' no matter what they tell her.