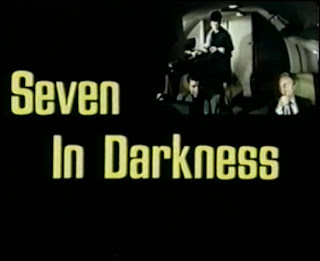 There are some things one never forgets. Ever.

There are places in time you can’t (or wouldn’t) replace. One of those times and places was in my parents’ den circa 1975. The local channel always aired choice made for television movies and it’s where I got a real taste for the genre. Ask anyone who can remember that far back and you’ll hear the titles Don’t Be Afraid of the Dark and Gargoyles bandied about so much it would make your head spin. But aside from the well loved list of the most remembered (and cherished) titles are the crazy little ones that, for one reason or another, didn’t hit the memory grid quite as hard. One of these movies is Seven in Darkness. 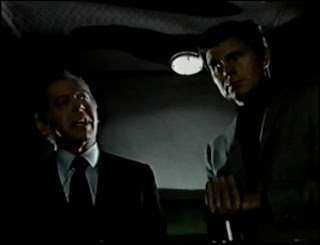 Uncle Milty tells it like it T-I-is!
I saw this movie about ten times when I was just a wee little Amanda By Night and man, did it ever leave an impact. The story revolves around a small plane, carrying mostly blind people (on their way to a blind persons’ convention! Hey, it’s a TV movie… anything can happen!) crashing on a remote mountain, and only the blind survive. With just their wits and a little sense about them, they begin their journey back to civilization. The clincher here isn’t the excellent, tightly wound drama, nor is it the shocking moments (hint: the movie begins with Eight in Darkness), but rather, the money shot here is the inclusion of Milton Berle as the crabbiest of the blind survivors. I know! Uncle Milty plays his part to the hilt - you hate him, you feel sorry for him, you enjoy watching his redemption… he’s got it! Among the other blind passengers, you’ll see a really young and quite beautiful Leslie Ann Warren, Alejandro Rey and Jackie Cooper look-a-like Barry Nelson. Everyone is in top form, making their expedition both involving and nail biting. 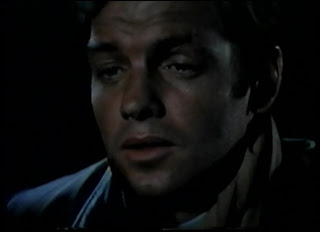 He might be blind, but dude can see, ya dig?
Having not seen this movie since the mid-70s I was worried it wouldn’t live up to my childhood recollections, because although the actual story remained vague, the impact lingered. I was pleased to find myself curled up on the couch with wide, anxious eyes. Great suspense never grows old.

Directed by TV mainstay Michael Caffey (who is also the father of Charlotte Caffey from the Go-Go’s), Seven in Darkness is not just a well equipped and unique drama about a plane crash in the mountains where only the blind passengers survive; it was also the first ABC Movie of the Week, giving it an esteemed honor. The ABC Movie of the Week was probably the most loved of all of the MOW programming. The movies always rated highly and a lot of the classics of the time came out under this moniker. I wish there was some kind of boxset for these. Don't you? 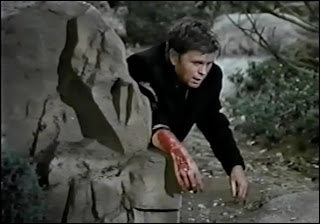 At least I didn't see what attacked me!
Posted by Amanda By Night at 9:57 PM

Email ThisBlogThis!Share to TwitterShare to FacebookShare to Pinterest
Labels: ABC Movie of the Week, adventure, drama, made for tv, suspense

Happy new year, Amanda! This movie sounds like it has real class. I dig the premise... Wonder why the idea hasn't been exploited more? (Unless I've answered my own question with the word "exploited" there!) Still, in the right hands, there's definite potential for remake/reworkings here.

I've been looking for this FOREVER. Where in hell did you track it down, or is that classified information?

This movie looks awesome. What a premise for a film! I'm surprised Milton Berle wasn't cracking his vaudeville jokes the whole time, lol. And you're right, they need to release box sets of all these ABC Movies of the week! Then we can get Making of a Male model too! LOL.

That would seriously be an amazing - a box set of every channel's MOV - or at the very lest some download on demand action.

And Propagatrix - it's on youtube in one full upload here http://www.youtube.com/watch?v=38IG7eOPBSU - so you can at least see it on the micro screen.

Loved this movie! I'm sure it's where I learned compassion and strength. Thanks for remembering with me!