Halloween Countdown: Day 10 - Don't Be Afraid of the Dark 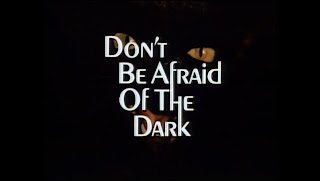 Ah, here we go! What a perfect time of year to air one of the best made for television movies of all time! The ABC Movie of the Week did it yet again, with this wonderfully eerie horror film, which aired on this day in 1973. Afraid is yet another movie that I have strong childhood memories of. I first saw this movie before I was even five years old when I still lived in our little abode on Eureka Street in Oxnard, CA. And I was scarred! The ending in particular stayed with me. There was a gap between seeing Afraid as a kid and then seeing it as an adult, but over the years, while some of it does indeed seem dated, much of it hits the the H-Spot - That's horror spot to you non-medical types. Again, this movie works with the more traditional elements of haunted house movies and it's pretty restrained stuff, but it's because of that restraint that the suspense is allowed to thicken. And those monsters are creepy! It's a true TV movie winner!

The nice folks at Warner Archives saw fit to give Afraid a great DVD transfer. Support your TV movie releases!

Update: In 2011 I celebrated Afraid with an entire week of posts. Check it out here.

And here's a groovy trailer for the vhs release:

I totally missed this one during my childhood and saw it on youtube a little while ago - and I found it pretty creepy. I just love it when I come across an old film that still works it's creepy magic.

I really love your blog btw!

Not available on Netflix... Doh! But there is apparently a remake!

Reportedly, Warner Archive are promising a "Special Edition," though they haven't said what would differentiate it from their current edition, or if it will still be DVD-R or a pressed disc. I hope it would include interviews or commentary, or at least maybe the original ABC Movie of the Week promo spot.

Carol, it still works in a lot of places, doesn't it.

Wings, I've written a bit about the remake. You can do a search, if interested. I think I have three posts on it. I'm excited. It's going to be completely different, but I'm all about shining a spotlight on the little guy and this remake certainly does that!

Marc, I didn't know they had promised a special edition. I'd LOVE to get some tidbits from the director and Kim Darby. Fingers crossed!