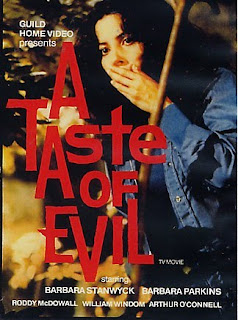 How ridiculously in was it to have a plot regarding someone trying to drive an already-emotionally unstable woman insane? Dominique is Dead did it, The Screaming Woman did it and Let's Scare Jessica to Death might have done it (I'm still trying to figure that one out)! It may seem a little tired now, but back in the 70s, emotionally unstable and chic was in, in, in! I've only seen bits of A Taste of Evil, and from what I remember, the opening scene is pretty killer. Aaron Spelling produced this ABC Movie of the Week, which aired on this day in 1971, and John Llewellyn Moxey directed. Talk about two great tastes that taste great together!

And a bonus title: It's not so much horror, but I couldn't pass up the opportunity to mention the incredible true crime TV movie called Out of the Darkness, which aired on this day in 1985 on CBS. Directed by former Directors Guild president Jud Taylor, the movie chronicles the life of the police officer who took the Son of Sam down! In reality, it's even less true crime than it is drama, but it's a favorite of mine, and this is my blog, dig?
Posted by Amanda By Night at 10:05 AM

This is one I been wanting to see for quite a while now. I first heard about it on a MSNBC crime special that was about some girl that killed (or kidnapped?) after watching this movie with a friend.

Oh, I hadn't heard that story. I'd love to read about it. I did a brief google search, but I couldn't dig anything up...