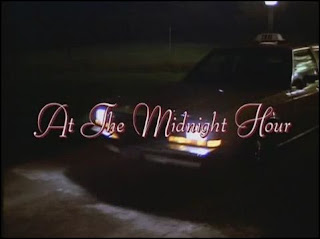 I sort of struggled with whether or not I should make this CBS movie, which premiered on this day in 1995, my choice for Scary TV Movie of the Day, but I decided on it for two simple reasons.

The first one is probably obvious... Amanda By Night adores her gothic thriller/romance hybrids. Especially when it's produced by Harlequin! You heard me, the trashy paperback romance company produced some really great little movies back in the 90s. OK, maybe great is overstating it a bit. I mean, it's no Shades of Love or Romance Theater or anything, but they really do fit the bill when you want some love and suspense. I had not heard of this movie until I made this list and the random reviews I've read have been fair to middling, but what can I say, I'm a sucker.

The second reason I picked At the Midnight Hour is because I have been wanting to pay a little tribute to Simon MacCorkindale who passed away on October 14th at the age of 58. I mostly love Simon because he was Manimal, but he also starred in one of my favorite Shades of Love movies (there goes that title again), called Sincerely, Violet. He was always a great romantic lead with that suave accent and Jeff Bridges like features. And let's not forget, he was downright sexy in Jaws 3!

So there's two great reasons to give this movie a go. Sexy and scary! YAY! 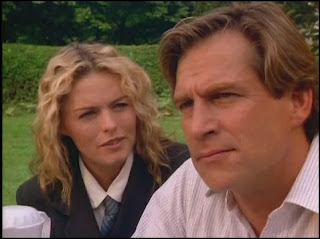 Sincerely, Violet is truly the cream of the Shades of Love crop.

Yay! Another Shades of Love fan! I recently saw Make Mine Chartreuse and I have to say... LOVED IT! :)