Halloween Countdown: Day One - The Stranger Within 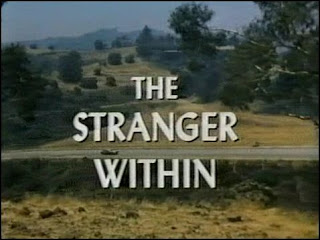 On this day in 1974, ABC aired one of the scariest made for TV movies of all time, The Stranger Within (click on title for review), which was penned by Richard Matheson and directed with a deft sense of suspense by Lee Philips. I would have been three when this came out, so I came to know it a little later in life, but I can assure you that although 36 years have gone by, Stranger remains one of the creepiest forays into the world of made for TV movies. Barbara Eden is just fantastic and the story of an otherworldly pregnancy is so creepy and thoughtful, it just goes to show why the classic techniques of horror remain classic.
Posted by Amanda By Night at 9:50 PM

That Stranger Within poster/ad you showed last time seriously spooks me out! I'd love to see this movie.

Interesting & sounds great! I have never seen this, so I will have to hope for a DVD release!

Hey guys, this movie is available through Warner Archive. It's definitely worth picking up! And thanks for stopping by!