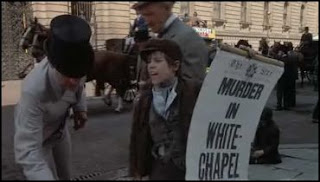 This mini-series, which aired on October 21st and October 23rd in 1988, was an event. Michael Caine starred as the dogged Inspector Fredderick Abberline and it marked his return to television after a 20 year absence (he last appeared on TV in ITV Saturday Night Theater in 1969)! Jack the Ripper was an ostentatious production, where the budget seemed to know no bounds. The set pieces and costumes are simply fantastic. The filmmakers were so sure they knew who the killer was, they shot different endings to avoid leaks from the set! This CBS mini-series was obviously meant to commemorate the 100 year anniversary of the Ripper's intense reign of terror during the late 1800s. I won't reveal the killer here, but the claims made in the film have been largely discredited since its airing. Still, the fascination the world holds with Jack the Ripper continues to endure, and although many movies have tried, very few have come as close to perfection as this version. Michael Caine won a Golden Globe for his performance (Piece o' Trivia: He tied with Stacey Keach who played Hemingway in, ah nice, Hemingway!).

Now available on DVD thanks to the fine folks at Warner Archives, this is another one of those small screen treasures that's been well deserving of a second audience.

And check out some machismo, 18th century style:

I loved this, Michael Cain was at his shoutiest best.

I really need to rewatch it. I saw it when it first aired mostly because my mom was the world's bigget Michael Caine nut!