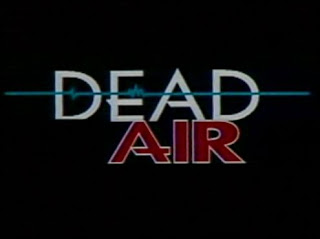 Gregory Hines was the coolest! I was thrilled to see that he was in this thriller which aired on this day in 1994 on USA. Dead Air tells the tale of a beleagured disc jockey who may or may not be getting calls from the person who killed his girlfriend. In the trailer below you'll see a lot of phone action, and so it's either a total surprise or none at all that Fred Walton who made the phone so scary in When a Stranger Calls helmed this little suspense flick. I love Fred, and thought he really upped the stakes of home invasion in Stranger's sequel, When a Stranger Calls Back, so I'm curious to see Dead Air. And of course, Gregory just seals the deal.

You can watch the trailer for Dead Air here. It looks pretty good!
Posted by Amanda By Night at 10:00 AM

Oh, I've seen this! A while back. For some reason I couldn't really get into it. I'd give it another chance if it ever shows up again, though...

You know Ross, I read it's a bit of a letdown. But that trailer is pretty tight. I am a sucker for all things small screen!

I hope you are well!