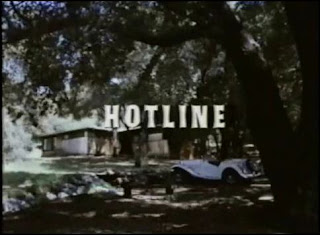 I am semi-obsessed with Hotline, which premiered on this day in 1982 on CBS, so it's funny that I've never reviewed it... Not only do I love Lynda Carter, but this movie also has Steve Forrest, Granville Van Dusen and the always wonderful Monte Markham. It's a pretty good thriller featuring Lynda Carter as a bartender who lives in one of those small idyllic California coastal towns that don't exist. And even if they did, she certainly couldn't afford to live there. Everything has that late 70s - early 80s wood panelled look that I love so much. She hooks up with this psychologist who runs a hotline for people who aren't as cool as Lynda Carter. She volunteers and begins to receive calls from the local killer. This one is pretty fun, has some nice phone terror and the twist is simply outrageous! I've been watching Hotline in bits as I go to bed recently and I really enjoy the whole set up and the pacing. Plus Lynda looks fabulous. I should also give a nod to Steve Forrest who I underappreciated until I saw Hollywood Wives a few months ago. He's basically the same airhead Hollywood stud in this, and he's way too good at it! I would wonder if he was like that if I hadn't seen him speak a couple of years ago at a screening of Phantom of the Rue Morgue. He was so gracious and warm and I've been in love with him ever since. And here's a nifty bit of trivia... did you know his brother was uber-stud Dana Andrews? Too cool!

Read more about Hotline at:

Hysteria Lives
Camp Blood
Anchorwoman in Peril
And the Horror Society did a nifty piece on a a trio of Lynda Carter's TV movies!

Never heard of this, and I love LOVE Lynda Carter. Heading off to Netflix, fingers crossed... typing should be interesting.

I had no idea that Forrest and Andrews were brothers. I see the similarities now.
I always thought it was funny that Dana Andrews was the guy who caused the mid-air collision in "Airport '75".

Lynda Carter is the tits!

I agree, Lynda is rad!

Bob, I totally can see the relation between Dana and Steve now too. They were many years apart and Steve said his brother was fully grown and a working actor when he was old enough to go visit him. I think they are both wonderful.

Wings, I'm waiting for a DVD release of Hotline myself. Fingers crossed!

Why have I never seen this? I have a lady-boner for everybody involved. Send VHS at once.

Always loved this movie - the first one of Lynda's I saw that didn't feature anything Wonder Woman and it sure was strange. not expecting her to spin round like she does/did.
So right about the great Monte Markhan, even if the killers identity is signposted about a third of the ay into the film its still fun. And the 'Madlyn Ames' rhyme still gets to me, after all these years I can still recall the words!

Beforehand, I apologize if you take this as spam but here is the movie online. In case you want to feast your eyes.
https://www.youtube.com/watch?v=BQsduCk7J-U