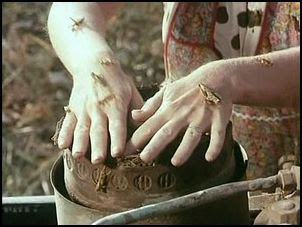 What's Halloween without one Nature-Run-Amok flick? Locusts was an ABC Movie of the Week that aired on this day in 1974. I actually saw it when I was a kid, but have only the vaguest recollections of it. I remember the actual locust attack and I remember that our local station used a clip from that scene in their Afternoon Movie advertisement... I'm also pretty sure I remember a young Ron Howard on a bus. And that's about it folks. Turns out Locusts has a stellar cast, Howard co-stars with the great Ben Johnson and the even greater Katherine Helmond. Ron's awesome father Rance also has a part in Locusts. Apparently the movie is a mixture of family drama and crazy bug attacks. Wow, it sounds incredible! I would definitely love to re-visit it! I am pretty sure it was recently streaming on Hulu, but it looks like it's no longer available. Leave it up to me to miss the good stuff.
Posted by Amanda By Night at 4:13 PM

I remember watching this movie, too. I think I was a Junior in high school.

I really want to rewatch this. My vague memories keep pulling me back!

Thanks for commenting and stopping by!