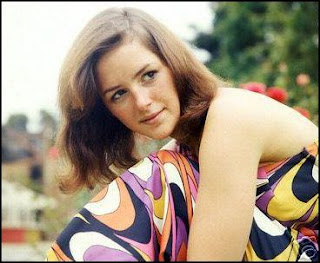 Much like The Bermuda Depths, Sandcastles seems to be one of those movies that haunts the people who caught it when it first aired on this day back in 1972 on CBS. The story involves a drifter named Michael (Jan Michael Vincent) who takes off with his boss' money and doesn't live to regret it. Some time later, his otherworldly form is found walking the beach by a lonely and beautiful musician named Jenna (Bonnie Bedelia). He wants her to help him right his wrongs, but she refuses because it means he'll be able to leave this earthly plane, thereby leaving Jenna all by her lonesome. A little self-centered, I agree, but totally understandable.

A quick browse of the comments on this movie's IMDb page makes it obvious that Sandcastles made quite the impact. It was also considered a revolutionary film because it was the very first TV movie to employ the single camera video system. The print was later transferred to film (I got that bit of info out of Arvin Marill's awesome book Movies Made for Television!). I would love to see this, and it did get a DVD release, but this starving student can't afford those prices right now! Still, it looks like a film worth discovering!
Posted by Amanda By Night at 10:19 AM

Was it supposed to be a show pilot? Sort of like a pre-Earl Earl, with the afterlife thrown in?

I'm not so sure it's much like Earl... Maybe if Earl has some From Here to Eternity moments... :)

I don't think it was intended to be a pilot either, but it's worth investigating!

I can remember seeing this. It seemed to pop up on one of the UHF stations in my area a lot when I was growing up. All that sticks in my mind was the fact that it was shot on video. Made it seem like a TV show more than a movie.