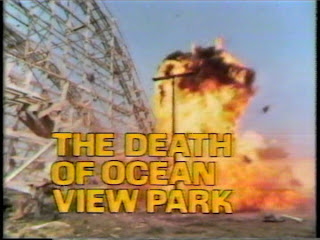 It's been some time since I've seen this movie, but I do know it stars Diana Canova as a haunted young lady having nightmares. It seems her dreams are predicting the devastation of the local boardwalk. Somehow Mike Connors and Martin Landau fit in... and man, I'm thinking I need to see this again!

The Death of Ocean View Park debuted on this day in 1979 on ABC. Playboy was actually involved with this film. Surprisingly enough they had their hand in a few awesome made for TV movies of yesteryear such as Deliver Us From Evil (1973) and Beyond the Bermuda Triangle (1975). The idea to make a movie came to be because the actual park, which was located in Norfolk, VA was going to be torn down, so in true Roger Corman style, a film was put together so they could use the footage of the demolition! Gotta love it!

The film has become a bit of a time capsule for people who used to frequent Ocean View and so it seems a bit ironic that the movie has become a time capsule for me because of my adoration for the almost-extinct made for TV movie. Both the park and the film leave feelings of bittersweet nostalgia. Perhaps not the best recipe for Halloween horror, but hey, I ain't picky!

And if you want to get real nostalgic, check out this TV spot:

Man, I loved me some Diana Canova back in the days of Soap. I've never heard of this movie!

I remember this movie.

Hah! Back in the day I totally watched this just to see what an amusement park looks like REALLY blowing up vs. fake blowing up....

Stacie, I love Diana too. I remember that 80s show she did called Throb... oh man, loved that show... Did you know she used to date Steven Landesberg (sp?) who played Dietrich on Barney Miller?

Bob, I have to see it again. I have very little memory of it.

Dan, you seem to be about research! :)

OMG, this looks sweet! Disaster movies were an obsession of mine when I was younger. Have you ever seen The Day The Earth Moved? It's a TV movie starring Stella Stevens I saw a long time ago...she wears a cool headscarf and the ending is totally pointless- the whole town escape in a mini plane as the Earthquake hits (when they could have easily just ridden it out in the surrounding desert). Would love to see it again!

I have NEVER seen The Day the Earth Moved. OMG. I must! I must!