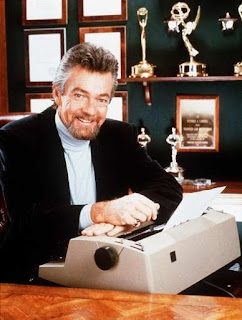 For someone like me who grew up on 70s and 80s television, hearing the names Aaron Spelling and Stephen J. Cannell could easily be likened to the sound of a light rainfall in summer. In other words, when it comes to guys like them, I'm easy like Sunday morning, ya dig? And both Spelling and Cannell impacted me in ways I never really understood until they were gone.

Cannell came up in a world where three networks were almost all we had to keep ourselves entertained and I imagine the market was was tough. He broke into television in the early 70s as a writer for Ironside and got his first producing credit in 1973 on a TV movie called The Chase, which starred Mitch Ryan (i.e. Greg’s dad on Dharma and Greg) as an unconventional cop. This pilot movie, which was also created by Cannell, was picked up as a series and ran for one season. After that he would go on to become one of the most prolific creators/producers/writers in television. He was responsible for such wonderful television shows as Toma, The Rockford Files, Tenspeed and Brown Shoe, The Greatest American Hero, The A-Team, Riptide, Hunter, 21 Jump Street and Cobra, among many, many others. 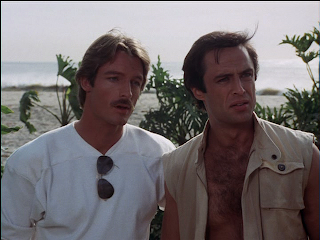 Cannell had an eye for goofy machismo!
I saw this quote from him on IMDb, “Even though I was flunking English because I couldn't spell; in my high school year book under ambitions I had written 'Author'. When I went off to college I ran into a guy at the University of Oregon named Ralph Salisbury who was my first creative writing instructor and he turned all the lights on for me. He was the first teacher in all my years who actually said I had talent. Some people don't know this, but I have dyslexia."

Although I don’t recall reading a ton of interviews with Cannell, his dyslexia was something I was very aware of and it made for some inspirational dinner table conversation. My parents and I admired him immensely and adored his shows. My mom practically brought me up on The Rockford Files, and looking back I see where I inherited my boy-craziness from (boy, did she love James Garner). I have to say, I love Jim Rockford too, but Riptide and 21 Jump Street were my favorite shows to come out of the Cannell empire. In fact, I have recently been re-visiting both and they are just as good as I remembered. I was actually surprised with how well Jump Street has aged. Teen angst – that stuff never gets old, you know? I’ll even forgive him for Booker.

Cannell was married to his high school sweetheart and by all accounts, was a wonderful man who loved creating and writing. Not only was he talented, but his passion for television was certainly infectious and I can thank him for passing me the bug. My thoughts go out to Stephen’s family and friends.

You can visit Cannell’s official website for more information on one of the greatest talents television ever saw.

And you can read my reviews of:

Piece o’ Trivia: Cannell wrote the awesome Columbo episode titled Double Exposure which featured Robert Culp as the bad guy. Let me get this straight, Stephen J. Cannell, Levinson and Link, Peter Falk and Robert Culp... together in one room?!? How did the earth not implode from all that awesomeness?!?

A nifty Rockford Files TV spot:
Posted by Amanda By Night at 9:53 PM

Stephen J. Cannell was one of the interviewees for Lee Goldberg's book on unsold television pilots, and one of those pilots was for a show called Nightside - on which he teamed up with Glen A. Larson. THE Glen A. Larson. That does sound like an awesome teamup, but Cannell told Goldberg that pairing them up didn't make the finished result twice as good - "It was funny as hell, but it just didn't work." Nonetheless, it would be great if Universal let this out of the vaults - it's Stephen J. Cannell and Glen A. Larson, it's got to be worth a look! (Too bad Cannell never worked with Donald P. Bellisario to bring it all full circle...)

Ack! I just tried to leave a comment and it pooped out. Let's see if I can remember what I wanted to say...

I really need to find that pilot Cannell and Larson worked on. And that book you mentioned! It sounds awesome!

Cannell and Bellisario worked together on Black Sheep Squadron, but I'm not sure they worked together on any episodes. I think it's an interesting pairing because both have this obsession with helicopters! Well, Bellisario moreso, but you get my drift... Also Magnum and Riptide are essentially the same show, only Riptide was crazy with beefcake! No complaints from me! :)

I saw Larson speak a few years ago when they screened the 3 hour theatrical version of the pilot of Battlestar Galactica. Larson is one brilliant dude.

Thanks for stopping by and commenting. You are always full of some great tidbits!

As a special feature on one of the DVD releases of 'Silk Stalkings,' you'll find a very long interview with Cannell himself. He talks about great stuff including how he started with 'The Rockford Files' and his relationship with Mason Williams--and Mike Post who did several of his shows' theme songs.

Sorry, but I don't remember which season of 'Silk Stalkings' this interview was located. But it's there.

Actually, Don Bellisario co-produced Black Sheep Squadron with Stephen J. Cannell for Universal Television, between 1976-78 on NBC. Still, after Nightside, imagine what we would've had on TV, if Universal had allowed both Stephen J. Cannell and Glen A. Larson to take another shot at another TV series, together, now that's something to think about!!!