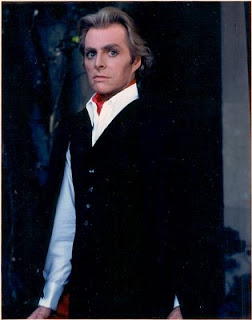 Wow, the more I post these Halloween-esque titles, the more I realize that I still have so many movies to see (and write about)! By all accounts, the ABC movie Vampire, which aired on this day in 1979 is an excellent film, and one I've been wanting to see for what feels like forever and a day. Richard Lynch is Aton Voytek (looking good Richard!) and after he's awakened from a long sleep, he's out for blood! Gee, a vampire out for blood... imagine that... Some of the awesome cast members include EG Marshall, Jessica Walter and Jason Miller.


Piece of trivia: Vampire was co-written by Steven Bochco. That's right, the serious guy behind such shows as Hill Street Blues and NYPD Blue has a taste for the gothic! 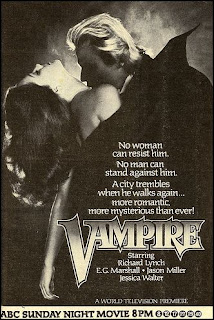 Lynch has a creepy-vibe in pretty much all he does! Never heard of this, but hope it comes out on DVD someday!

This was the movie that turned me into a Richard Lynch fan! At the time, I was disappointed that Vampire never became a series (the TV-movie seemed structured like a pilot, I remember).

Keep up the good work!
--Ivan

I only saw this once back when it was first broadcast and I always hope that someone will give it a DVD release. All these years later, I barely remember any details from the movie but with a cast like that, how can it not be fun to watch?

I love that movie, I saw it a long time ago, and think this halloween may be time to see it again.

Whoa! First glance I thought that was Peter Scolari and the intro to Bosom Buddies popped into my brain and I had a hard time seeing him as Dracu-lesque.

The MTM logo customized for this movie (yes, this was made by MTM) doesn't seem to be on YouTube... it just says "An MTM Enterprises, Inc. Production" in blood red against a black background with no kitten! Mimsie must have been too scared to stick around for the end...

Hey everybody, thanks for all the comments. I so need to see this!