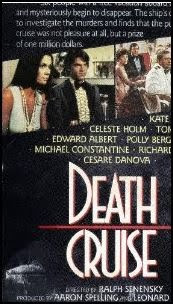 Terror on the high seas was never this glamorous! This ABC Movie of the Week which premiered on this day all the way back in 1974 has managed to elude me, even though it had a vhs release. It sounds a little bit like Love Boat meets Ten Little Indians, only there's six Indians here. But you get the picture. Three couples win a contest they never entered and find themselves cruising towards... you got it... death. And check it out - this is yet another Aaron Spelling movie! Death Cruise just reeks of awesomeness, don't it? Another one to add to the must see list!

And like yesterday's post, this is in honor of the late Tom Bosley who stars here alongside such wonderful actors as Kate Jackson and Richard Long. Bosley will always be known as Mr. C, but he was so great in anything he popped up in. RIP Tom.

Haven't seen this either, but I HAVE seen both KILL CRUISE and DEATH SHIP though. I also get a LAST OF SHEILA vibe from this, which came out a year prior, so this may be the TV movie version of that.

I was way too young to have watched this back then, but it looks cool!

I saw this when I was a junior in high school.

I kept mixing this film up with Cruise Into Terror with Dirk Benedict. I so need to see this. It looks pretty awesome.

I have it and love it. Kate Jackson is, as always, incandescent.

I really, REALLY need to see this. Jackson is the BEST! :)