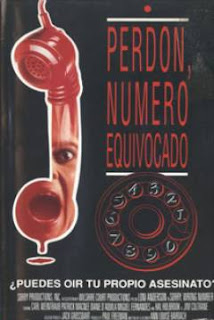 Alright, no offense to Ms. Loni Anderson, but man, October 11th was a dry day in TV horror/thriller/crime/drama or otherwise. This movie came the closest, and indeed it is a thriller, but by all accounts, it's also a big, fat stinker.

And what is it with phone terror in October?

Sorry is a remake of the 1948 movie which was an update on the original radio play and we have Loni Anderson in place of Barbara Stanwyck (Agnes Moorehead starred in the radio version). I actually really like Loni as an actress. She was so great on WKRP and I think she's pretty good in most of her television fare (My Mother's Secret Life is just so dang good!). She was definitely well cast here, but something just didn't click. Of course, I'm basing this on second hand info. I don't recall ever seeing Sorry, but the IMDb user comments which scream "Blech," and "Worst movie ever!" does not bode well for this made for USA movie which aired on this day in 1989.
Posted by Amanda By Night at 10:12 AM

I have a vague memory of this, but that is all...

Never saw this one either, but the original movie and even the original radio suspense show that was based are brilliant! The movie really fleshed out the characters and their motivations. The radio drama was creepy because it's just something that happens and you don't know much of anything behind it.

I haven't seen or heard the other versions Ginger, but I'm a sucker for movies like this!