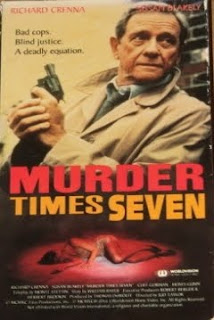 Awww, I love Richard Crenna. Here is a man that always puts a smile on my face. What a warm actor he was and I think he was always good as The Cop. Hell, he even made the lead in The Rape of Richard Beck sympathetic - that's really saying something! I had not heard of this movie until recently, but Murder Times Seven is actually part of a series of cop procedural thrillers and Crenna plays a character named Frank Janek. This character first saw the light of day in 1985 in a Willam Bayer novel called Peregine. Murder aired on this day on CBS in 1990 and features Janek tracking down a killer responsible for several grisly murders! I'd like very much to see this please!

I have a cousin named Richard Beck. When that movie came out, kids made fun of him for about a year.

it's got a great title too! reminds me of DEVIL TIMES FIVE - which isn't made for TV but is a great low budget horror flick.

I'm Spanish, and I think American movies always sound better in English, lol. But I must say that Spanish dubbing actors are the best in the world.

I've never seen this but i have to chime in with a comment that mentions how badass Richard Crenna was. I love this guy and I need to see this.

Bob, that's SO funny. When that movie came out I'm sure he was all, "Aargh!"

Carol, I've never seen Devil Times Five but I do have a copy of it. I need to dig it out. Isn't Leif Garret in it?

Womansblues, my last roommate was obsessed with watching horror movies dubbed in Spanish. Well, mostly Exorcist 2, but it just made him giddy, and he spoke no Spanish! I agree, the dubbing actors are amazing!

Jeremy, yeah, The Crenna was certainly a badass. I just adore him.