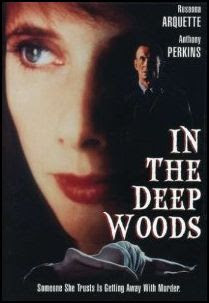 Serial killer madness struck NBC on this day in 1992! In the Deep Woods is probably best remembered because it was Anthony Perkins' last film (he died about one month before it premiered). It looks like many of those early 90s crime thrillers which brought the TV movie world to a halt, but from what I've read, it's a really fun whodunit and you know, that Perkins guy can do no wrong. Here he plays a cop hot on the trail of a killer and he creates an aura of paranoia around Rosanna Arquette who starts to think she may know the culprit. Also, Kimberly Beck, D.W. Moffat and Will Patton all show up and probably look very cool in that early-90s-Melrose-Place-kind-of-way! Me likey! This movie is available on DVD through Amazon
Posted by Amanda By Night at 9:56 PM

Just want to let you know, the tv movie "When Michael Calls" from the 70s is airing on Fox Movie Channel @ 6:00 PM EDT time today!

I have never seen it, but I set the DVR cause it looks good!

I don't think we get Fox Movie. My fiance couldn't find the listing! I do have a bad vhs copy of it. It's pretty good, if I remember correctly. Thanks for the heads up!

I liked In The Deep Woods; if I recall correctly the solution had something to do with nursery rhymes, what with the lovely Rosanna Arquette playing an author of children's books.