Halloween Countdown: Day 28 - KISS Meets the Phantom of the Park 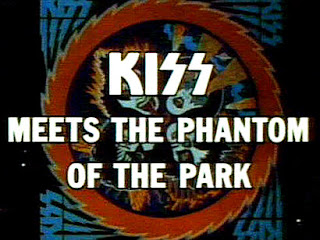 Although it's considered a big ol' train wreck by pretty much everyone involved (and some of the viewers as well!) I still think KISS Meets the Phantom of the Park is pretty wonderful. This NBC movie which aired on this day in 1978 is kind of magical. There, I said it. Produced by Hanna-Barbera, it's pure childish fodder, but instead of a big cartoon bear you've got Gene Simmons. Sure he's smarter than the average bear but he says things like "Star Child!" too! How I love thee! Actually this movie is one of the most fun TV movies of the decade. It's got ultra-silly sound effects and it features the band as superhero types out to foil Anthony Zerbe, aka the Phantom of the Park. He's making certain park patrons into robot-zombie types who will do his evil bidding! Does it get anymore awesome than that? I mean, seriously. Plus Peter Criss' Beth is one of the best songs of all time. It just is.

Just cuz: The band still slams the movie to this day, but I met Peter Criss briefly in the early 90s and I asked him to sign my trusty vhs copy. He looked at it and said, "Cool!" I think we all have a soft spot for this Phantom!

Read more about KISS Meets the Phantom of the Park at TV Party!

Check out this awesome promo for the movie:

Seems like it would have been the perfect combo for Halloween. I remember seeing KISS on tv when I was way small and being scared out of my wits!

Gene, Gene... I MUST see this. If his acting is anything like in "Never Too Young To Die", then this will be on my top ten! Thanks for bringing this to my attention! I'll make it a double bill viewing along with the Paul Lynde Halloween Special!

Amanda, have you seen the European theatrical version of this? It mixes things up a bit...it is available on Volume 2 of the KISSOLOGY DVD box-sets and it even has a commentary track!
I dig this film a lot to, mostly because I really love KISS in this period. It is a lot of goofy fun and "Beth" freaking rules!

Wings, I was scared of KISS too when I was young. This movie is pretty kid friendly though and I fell in love! :)

LitaMalibu, you should see this, it's silly and such a time capsule. I love it every time I watch it.

Jeremy, I NEED that DVD! I need to see who's on the commentary track.

I'm old enough to have seen it when it originally aired in 1978, I then saw it again as a theatrical release in Mexico. I now have the DVD as part of the KISSOLOGY box set. Great fun!

I saw it in the early 80s Luis. My brother is a HUGE KISS fanatic and it was playing as the midnight movie on our local station, so we stayed up and taped it. He had this hard plastic vhs case and tricked it out with Kiss stickers! We had that video forever!

The commentary track is bizarre. I seem to recall they have the bitter, gay costume designer on it... No, really.