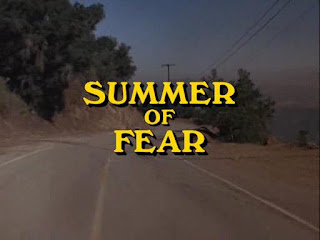 Originally, I was going to do several TV movies, all of which would have aired on this day back in time... but since I'm out of town and didn't have as much time to prepare as I would have liked, and because I'm at a Chiller convention where I was about 5 feet away from Linda Blair, I thought I'd choose this NBC film which aired on this day in 1978. 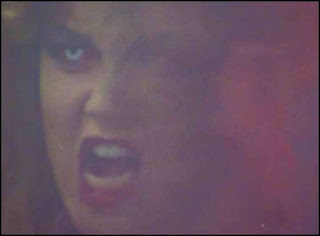 Linda is cute as a button here as the beleaguered but spunky teenager who thinks her cousin is an Ozark witch! I really like Summer of Fear aka Stranger in Our House. It's got a lot of energy, a great cast and it shows the early potential of Wes Craven who helmed this little flick. It's not my favorite of his TV movie horror films, that would be Chiller, but it's a lot of fun and a movie I find myself enjoying more with each viewing. It's horror-lite, but perfect fodder for a relaxing Hallow's Eve!

And wouldn't you know it, Summer of Fear is on DVD! There is a commentary track with Wes and it's just fantastic. Well worth the price of the disc.
Posted by Amanda By Night at 9:00 AM

I absolutely LOVE Summer Of Fear. Such a great movie. And you're right, that DVD is worth it's weight in gold. Craven rules!

Never heard of it, sounds interesting!

Wes Craven's commentary is so enlightening while being fun. He's truly genial while giving you a ton of info. I love Wes. It's true!

OMG, I see that pic of Stockard Channing and I know that movie! Do you remember if you posted about it and if so, can you give me the link?

This is high on my favorites list too. The scenes with Cousin Julia and Linda's dad are surprisingly sexy-creepy.

Of course, the source material (Lois Duncan FTW!) is even better.

Barbara, the still is from a TVM called The Girl Most Likely To with Channing and Ed Asner, among many others. It's wonderful! Joan Rivers wrote it, yet it's actually funny! Here's the link to my review:

Propagatrix, I have not read the novel. I should do that. I should give the novel they adapted for I Know What You Did Last Summer a go too. I don't think I ever read Duncan even though I grew up at a time when I should have been reading her. Watching too much Sledgehammer I think! :)

I LOVE "Summer of Fear". It's so simple and yet such great fun. The cast is very good and Linda Blair is great.